Whilst in the rock and roll metaverse meetup in the NY lower east side I got chatting with "Eric Reuters". We had not met in real life. As part of the old fashioned way we swapped cards and then emails.
Eric put me on to this awesome video on youtube. A brilliant mashup of rap over the top of a complete version of the predator movie in 6 minutes. It is both very clever and took a lot of time and effort to do.
I appreciate this on several levels. The first is a while back I ws trying to boil films down to the key scenes for a range of t-shirts called "under the influence" the closest I got to doing this was a montage that I use as a backdrop on twitter.
Secondly is the predator movie :-)
Thirdly, it was from a contact in Second Life and we were meeting in RL in the middle of a party scene of fellow metarati.
Fourth I was berated a little by DJ Astrud Sand for my last.fm music list as there was nothing new on it (partially because I had not been scrobbling much and the fact I had a mix up on accounts so I am vepredator on there. It turns out that this video was created by the members of a new band called The Anomalies.
I popped over to their myspace page and I must say I liked what I heard, so I will scrobble that when I get to my home machine and feedback into the loop of conversation from the lower east side party.
So in one fell swoop this has covered Second Life,real life New York, Last.fm, web2.0, web1.0, UK bands, Predator, mashups,youtube, myspace, itunes, rock and roll parties and serendipity.
That's exciting I think.
Anyway here is the video, listen how the lines rhyme from the rap to the parts of the film and the great line "so he set of a bomb, cos they don't like losing where the predator comes from"


They also have a website in an old fashioned way :-)

Rock-Pig - Very funny this one

I have been mentioning how we have thought of ourselves as all rock and roll as metaverse people, and of course we are :-) and that the Nickelback rockstar song is a tongue in cheek anthem now.
Well Andy's son has gone and gone the guinea pig version. Always good for a laugh and I do like this.

Virtual Worlds 2008 - The after show parties

Ok so conferences are a subtle blend of business and social. The virtual world conferences tend to have quite a large element of social. The medium we are working in, namely metaverses is inherently about connecting people. It is also a growing. but young industry so there are many "movers and shakers" who care passionately about it all.
The first nights party saw many of us wander along to the Electric Sheep Company offices in Manhattan. There was some fantastic buffet food, a very generous bar (featuring Jack Daniels amongst other things) and out back was Rockband set up on the Xbox. I particularly enjoyed getting to play Rockband as we dont have it in the UK yet and I am a Guitar Hero fan. Of course the blend of timezones, late nights and the previously mentioned JD may have affected my musical skills and coordination, but I did really enjoy the gathering. Thanks muchly ESC.

The second evening was a very late one, Ids and I made our way down to the Lit bar in the lower east side to a metaverse meetup arranged by Annie Ok and Jerry Paffendorf. There were a stack of people there who are very active in creating and using Second Life and other metaverse tech. Annie has a particularly good set of pictures in her set here there is also a generic metaverse meetup group here

I did not get to take any video as it was very dark in the Lit bar. However Xantherus has made lots of videos of the Virtual Lower East vLes.com side that she worked on for MTV that was announced live at the conference.
Here is one video with Annie narrating :-)

I mused earlier on the difference between the almost grunge rock and roll chic atmosphere of the East coast metaverse scene versus the more techno cleanliness that seems to exists in the rich silicon valley west coast culture. I then merge that with out UK, Hursley countryside geekdom. It shows that there is somethine for everyone in the metaverse business.

Sifu pointed out at the conference he was expecting more cos-play apart from em that was as he pointed out I sort of do that all the time with my eightbar shirt and leather striped jacket.

Anyway it was good to see everyone, the 2am Macdonalds with Idz after the party really did show NY is the city that never sleeps. Though strangely the next day (Saturday) it was strange to find Macy's not open until 10 am.
Posted by epredator at 6:51 PM 1 comment:
Labels: electric sheep, lit bar, new york, partys, vw2008 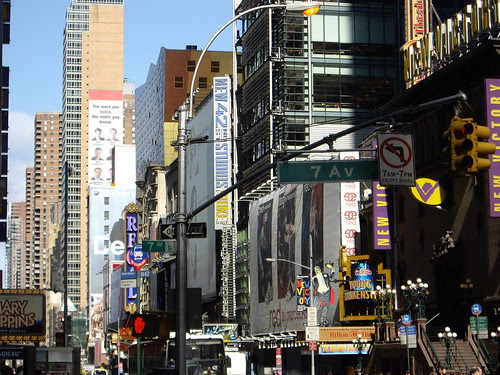 Yesterday was flight back from New York. It arrived about 10am UK time into a snowy LHR. We were stacked up for a while whilst the weather did its thing.
This trip has been a vary metaverse full one. Whilst only 7 days it seems like a few months (in a good way as so much has happened)
I think it is also, as evident in this picture, that the US bombards your senses with information, all the information is usually also augmented with stacks of text and warning signs.
So this trip.
1. Hawthorne - A day of meeting the IBM metarati from across many divisions, a real coming together of all the streams with such a stack of common insight not infighting.
2. Somers - CIO IQ team gathering. All the Innovate quick team in a room in Somers, again common understanding and purpose
3. NYC - Another cross IBM gathering (video in the next post) where we took to the streets of New York in a kind of virtual world treasure hunt time travel gig.
4. Virtual Worlds 2008 - 2 very busy days of conference. A massive trade floor to cover, conversations to be had, metarati to gather plus 2 evenings of party. The first at the electric sheep company offices (many thanks to them all) and then in the lower east side Lit bar (thanks Jerry and Annie) for a mateverse meetup.
5. A day dashing around new york city with Ids and Roo chatting and snapping pictures and eating food before heading to the airport.
I have not (except on the overnight plane) had much time to reflect but I know there are some new ideas forming in my head, and yet another perspective on where this all needs to go now.
I am even more convinced the industry is here to stay now.