There is a chopper gag in here somewhere

Saturday and Sunday here at Wimbledon is a strange experience. The times we work and hours we do sometimes we just have to spend a few moments decompressing. Andy brought in his helicopter control kit. Sat and had a few goes, uttering as we do "we are here on a weekend and we are not getting paid" and then got back on with all the things we do all day.
This app is really cool though, its a trainer for RC helicopters. The model and simulation is brilliant and it uses the same controller as the real RC helicopter.
So for me watching this and seeing how it works was actually part of my work research. Mixing real and virtual as this does for training is an important thing.

Facebook, another reason it sucks (or is it lawyers)

We were having some fun with Facebook and a Wimbledon events profile and page. We thought it had been deleted by one of the team of writers. Apologies to Mike, he did not delete the Wimbledon Facebook page. Oh no.... Facebook did. Web2.0 corporate madness. The seemed to have taken the page down as Wimbledon is a company. Yet, Wimbledon is a community of people interested in tennis and a bunch of tech geeks from IBM too.
I have not been a great fan of Facebook, but apparently an organization cannot have a page, but an individual can. I see the need to stop spam, stop adverts, stop a takeover. yet here they have taken down a joint community venture that is a real social network because... well must have been too popular.
I am sure the lawyers have got hold of it all, control seeping in (like the mistaken take down by IMG of my Wimbledon youtube video and need for Viacom to be given all the youtube users details)
I know like the rest of the internet Web2.0 will route around this. However, I am very very dissapointed at facebook, and its probably the nail in its coffin for me.
Posted by epredator at 9:21 AM 1 comment:
Labels: facebook, wimbledon

Hands of my data Viacom!

It is dissapointing, but not surprising that a company like Viacom cannot seem to engage with the public in a way that makes them want their content, and those that do they decide to beat up on by forcing google to hand over EVERY users set of details and viewing figures.
I am not sure if Viacom realize that this is such an anti-web libertarian move that the damage it will do to their properties by this action is far reaching.
Yes, protect copyright, but.... if something is good people will pay for it. If you make it hard to consume on the web people will find a way.
You cannot have my details. In fact I think that each youtube user should take some class action or individual legal action against these bullying tactics.
A judge in the US decided how millions of users in the worlds data should be handed over.
I choose what I share, I am obsessively public, but by choice, not by large media company legal action.
Posted by epredator at 9:54 AM 2 comments:
Labels: google, viacom, youtube

Boogie with Britney and Ricky at Wimbledon

Ricky tried to play Boogie on my DS. It was outside in the back garden here at Wimbledon, it was late, very late, so dont judge his skillz too harshly

Posted by epredator at 9:32 AM 1 comment:
Labels: boogie, ds, wimbledon 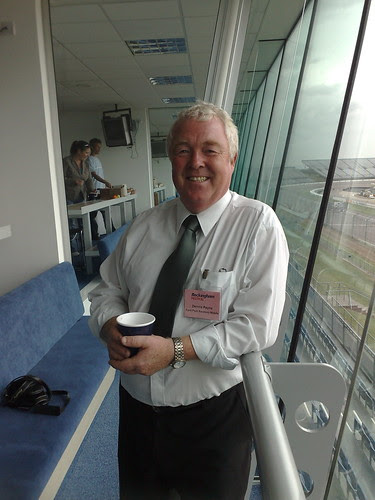 During a break at the conference in Rockingham some other people popped into the green room. One was Dennis Payne who runs the brilliant slot racing company Fordpark Raceway 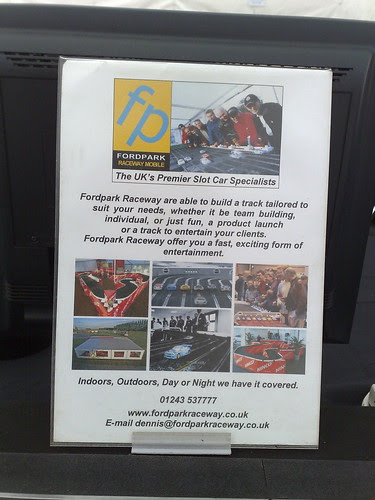 It turns out Dennis was once a ball boy for a few years at Wimbledon and worked on cengtre court during a very different era of tennis. It was incredible to hear the players he had seen and the difference in the game to todays hi tech approach.
I love coincidences, and it was great to meet him. Also to talk about the various clever things we could gadget up to the slot cars, assisted GPS, rfid tracking, onboard cameras etc...
The slot racing looked great too, though I never got out to have a go with it running as I was usually presenting or working. 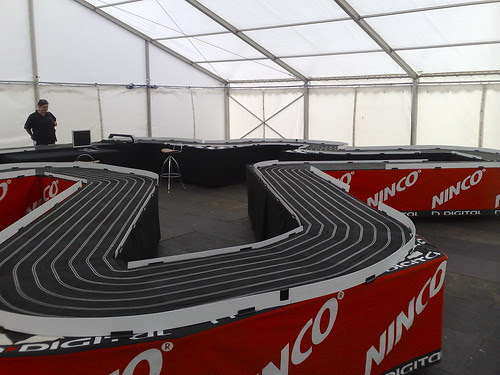 Michaela Hyde and Michael Rod (and my laptop) 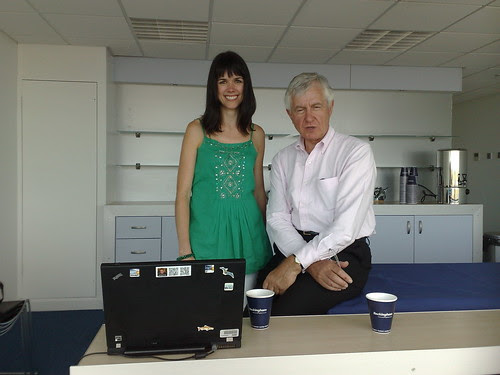 Michaela Hyde and Michael Rod (and my laptop), originally uploaded by epredator.

I was presenting at Rockingham raceway in the midlands to hordes of kids. The MC's are Michael Rod and Michaela Hyde.
Now as a tech geek and film fan Michael Rod is part of my youth. On Screentest I distinctly remember watching it to see clips of Star Wars and Battlestar galactica.
Then I watched Tommorrows World relgiously. A fantastic expo of all things tech and future in the 70's and 80's. It was initially live too. Live demo's of the future. Very much like the gadget show.
It is actually a great rush and honour to be able to share what I do with people. When they are people who infleunced me and my choices in career it is even better and an honour for me to be here.
Everyone on this tour is realy friendly and knowlegable, I could do this for a living... hey wait.... I do :-) 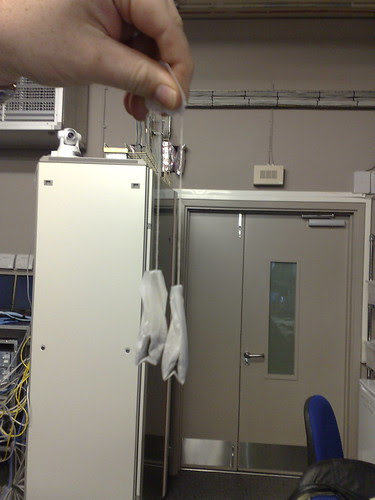 This did come out as an odd perspective, but really the oddness was that poor old judge went to the Wimbledon media canteen to get 2 tea bags for a drink.
They rang up a cost of 3 whole english pounds, and he was distraught to finf something more expensive than petrol.

A I have blogged this on eightbar and on my internal IBM blog I thought I would put it here too :-)

This year more than ever before the Wimbledon web experience is much more what us Web 2.0 geekanisters would like to see. Letting people experience Wimbledon wherever they happen to be. I am not just talking about the Second Life presence
This widget is another prime example, able to be embedded and posted all over the place, facebook, blogs etc. It is also personalized to the user, the players they choose to follow. Its been a quiet revolution for a website that got 266,311,332 page views last year over the event, but one that I am very happy to see.
So props to Stephen Hammer and the Atlanta sports event crew for putting this widget together. You have the next 7 days to enjoy its live features.

Its really funny that we have a picture John Lydon on the wall here in the Wimbledon house. I took the photo the other day of Jay posing by it. 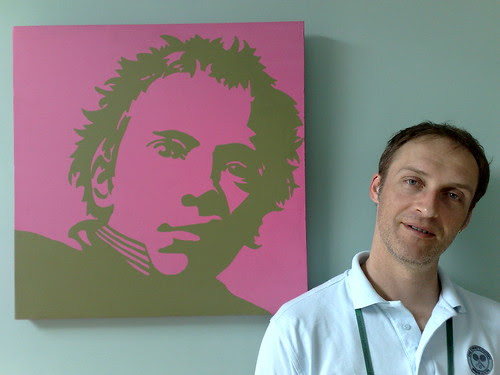 I was playing with my cut down crazy talk doing various faces and thought I would try this one.

Then.... I happened to be showing Qdos for a laugh and it turns out the list I picked... There is John Lydon, in qdos terms slightly better score than me. 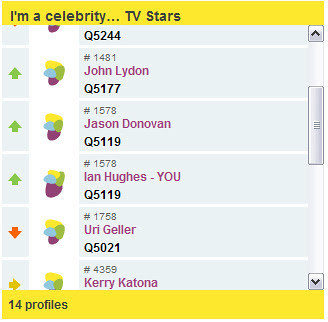 Of course I think Qdos needs to sort its act out and let us have single names. The Qdos is for Ian Hughes not epredator :-)
Not serious just a bit of a fun game and another strange coincidence that I said I would do a seperate post on later :-)
Posted by epredator at 10:50 PM 1 comment:
Labels: qdos

Middle Sunday here at the Wimbledon championships is a much needed rest for most people. Usually we are just too tired to do anything much, but we tend to all go our own way now on the day.
Still being in the house in SW18 I really could not be bothered to head up the various hills to Wimbledon village, but instead (eventually) took a stroll to Wandsworth town. Basically just because I needed a long walk, and I got to see something different and different people wandering about.
Before I went that direction I popped to out local shop for some supplies, and its right near the park. Already there were quite a few people queueing for tomorrow. Whilst moving the queue for security reasons from the side of the club is a good idea, it is surely good for all the people. The park makes a much more festival side to the whole queuing thing. 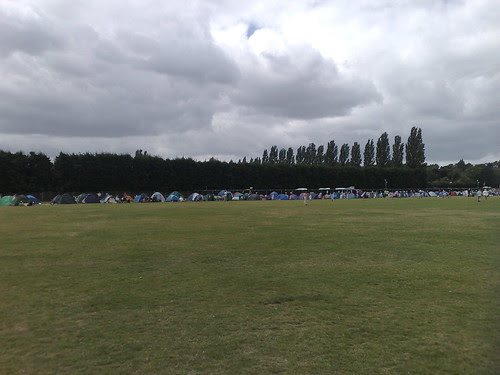 It turned out on my detour walk to Wandsworth that a road near us is nearly Ricky's surname. Just an odd coincidence which requires collecting with all the other ones this champs in a post of their own! 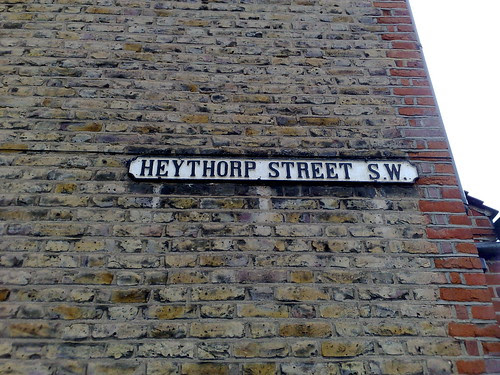 A little local art shop, which was closed had some very neat urban gnomes too 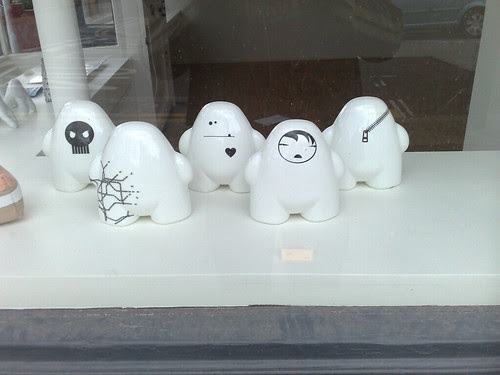 So what did I find in Wandsworth (funny every time I type the W I want to type Wimbledon cant think why)
Well I ended up in Game and HMV, but I did see Young's Brewery 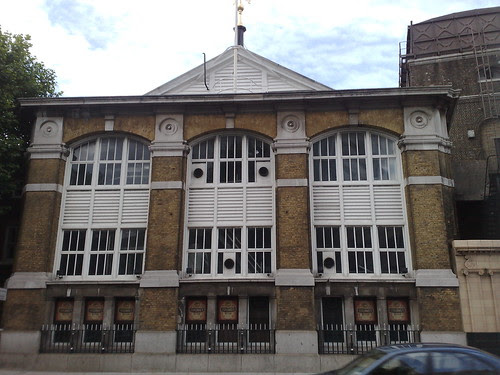 Armed with GPS on the N95 I took a bit of a detour, not much just the next road across and it turns out that there is a massively ornate church just at the end of the road. St Barnaby's. 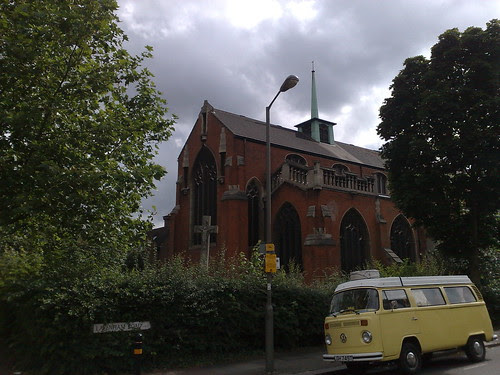 Anyway, I strolled back and spent a few hours playing Boogie on the DS making a little fat man dance to britney spears and some other classics. It was odd as I was going to watch the new Rambo movie, but just could not be bothered. Save that for home when I have a proper TV and sounds system to hand.
The best thing though was my spinach and ricotta pasta. I bought a £2.49 packet, put ina pan with water, salt and olive all. 7 mins later served on a plate with butter and black pepper.
Given my previous post, it is amazing how for £2.50 and 7 minutes of gas I ended up with something very very tasty, cooked al dente. So.... be nice if the venue could sort that out given the prices they charge out companies. Or maybe just pay staff to clean a food prep area and we will cook ourselves and pay a small amount of whatever the food equivalent of corkage is. 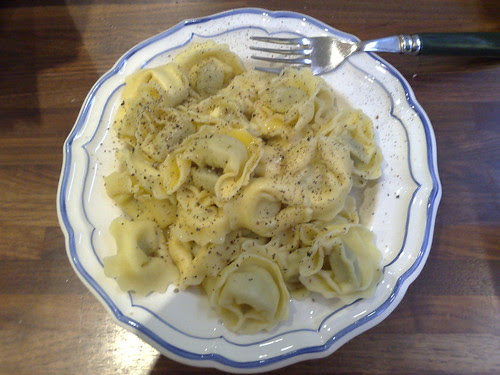