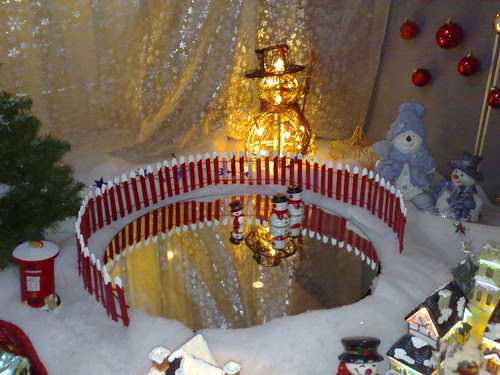 I posted something along these lines on my internal blog. I woul like to say a big thanks to all the people who organize the IBM Hursley Santa's grotto for all our kids.
The predlets really enjoyed it and love the presents.
For predlet2.0 it was his first xmas experience really.
So to everyone a big dose of christmas cheer and goodwill.
Thankyou

Posted by epredator at 1:04 PM No comments:
Labels: xmas

I have not yet managed to capture the images from call of duty 4 on the 360 but I have to say it is the most stunning and in some cases shocking game I have ever played.
Even the intro from the perspective of a prisoner being taken across town breaks a few of the usual rules you expect of an FPS enough to make you stop and go. Oh Wow.
The scenes inside a gunship flying over the country side with night vision just looks like CNN. However the combat back chatter and fog of war is also quite though provoking.
"Follow the curved road" is an order barked to your pilot. The response is, "er which curved road". It is set as modetn combat but it shows some of the sorts of communications that add to the confusion of close air support.
This is a game, and gloryfying war is a borderline thing. However, it makes you think. The scenes I reached having rescued a downed pilot and the subsequent effects thats again I will not spoil for you had me sit back and say, well that has never happened before in any game I have ever played!
Awesome, just Awesome
Posted by epredator at 6:35 PM No comments:
Labels: call of duty 4

Wow I must be famous

the other day I wrote an internal blog post inside the company after trying lots of other avenues to say that I am not overly happy with the recognition that I am getting from the company versus the external recognition the company gets from what I have done in virtual worlds and metaverses.
The post got 'leaked' ah shock horror. A "tina Bell" who took a dislike to my tone on terra nova has decided to plaster it all over the web. Well thanks.
It shows several things.
1. I still care deeply enough about my collegues that I am willing to carry on leading the way despite having lots of ways I could just said "s*d it" and pull the plug. My direct managers have been listening and trying, but have to work within a system. So, as in the post, I have a lot of respect and time for them and their efforts.
2. That inside and outside of the company we do have free speech. I have not breached any guidelines in the way I have communicated this, but I was able to communicate it. We are able to have a free and frank conversation, albeit inside the firewall.
3. The language used and the approach differs on the audience. Same persona, same belief system but just adjusted.

It also brings in an element of trust, the dissapointing thing is that a "collegue" should choose to "leak" something that is actually pretty well known.

It does not show anything other that how corporations do not really exist, that people do, politics is people.

So. to be clear.
Yes I am not happy at quite a few things. The pace of change in management systems has not been as fast as the pace of social change and technology change. However I still have hope. Otherwise I would have just left ages ago, enticed by a fantastic offer.
The things that I talk about and the direction we are going are all still true, they are all still happening. Just I am not getting the internal recognition that I was hoping would come over time.

So this could go a couple of ways.
My company could step up and say oh sorry, sort things out and then I will be writing glowing "see you do get recognized" posts as I already have for some collegues (which diud nto get leaked of course)
Or my family now gets to starve.
Or well its always the thing you dont think of isnt it.
Posted by epredator at 6:34 PM 11 comments:
Labels: blogging, life

I have a fair few connections on linkedin but I am happy to have more, in particular virtual world and metaverse metarati.
Linkedin has been great this year as I was asked to provide some evidence of my contribution to the w3rld and I have had some awesome recommendations publicly on Linkedin.
The balance of work/personal connections on linkedin versus facebook and alike is quite interesting. Especially for us blending work and social into one existence.
See you there :-)
Posted by epredator at 2:29 PM No comments:
Labels: connections, Linkedin

My cluster map is looking very interesting. Whilst this blog is by no means that high on the technorati scale, not close to eightbar it does still attract a readership from around the world.
Indeed I feel the urge to say "Hello World"

It is interesting which continents show up, obviously North America and Europe and to some extent Australia. The main bulk of Asia is a bit weak on hits.
Of course stats can be misleading, but it does make you think just how many places and people you can reach with a humble blog.
Ten years ago this just would not have been the case without writing a book or being on TV.
On the subject of books I really must write one/some about my experiences. I think there are a lot of lessons to be learned. Of course I have no idea where to start to suggestions/offers etc. gratefully received.
The rise of eightbar, turning over the traditional approach to corporate life with web2.0
I even have a title in mind "Who says Elephants cant Rez" as a nod to the famous Lou Gerstener book about turning IBM around in the late 90's
Other titles
"Well you didnt have to do it did you?"
"Don't you know who I am?"
"Yes they do like like fishnets, not lets talk about this million dollar deal"
"You cant be scared of an epredator when his surname is Potato"
"Epredator:The other same side of me"
I have some more but will hold onto them or this will be the book.
Posted by epredator at 7:27 PM No comments:
Labels: hits, virtual worlds, world 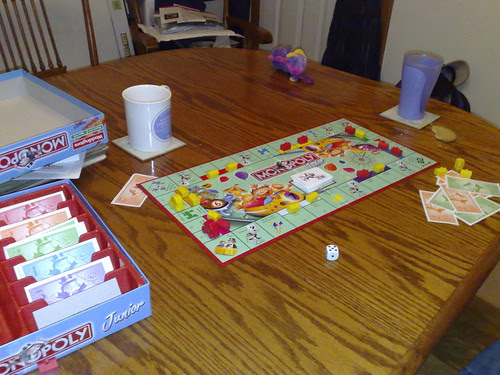 I have been honing my entreprenarial skills playing junior monopoly with predlet1.0.
I lost of course :-)
Its a great mini version of the classic game.
Instead of a board of places its fairground, roller coasters candy floss etc. The houses are ticket booths. So you charge the other players the fee to use the particular fairground facility.
The currency is 1,2,3,4,5 Pounds notes. The chance cards tend to involve getting a free property or being sent to one.
If you own both in a group you can charge double. That meant that as I had the "mayfair" of roller coaster and loop the loop I could charge the double rate of £10. The trouble was the predlet had lots of yellow ticket booths in double configurations on the mid range part of the board.
So.... she bankrupted me and is now very excited.