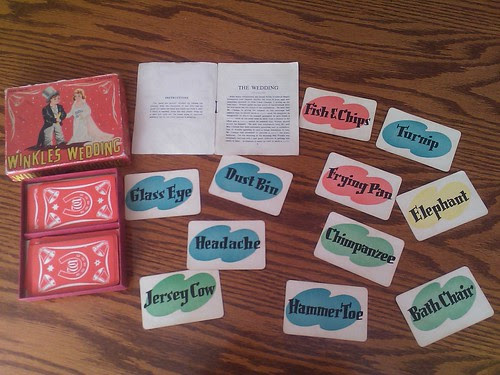 It's not all hi tech gaming in our house you know.
I have always been interested in board games of all types too. This is a game called Winkles Wedding, a christmas favourite when I was a kid as it belonged to my grandparents. I have no idea how old the game is. Though its more of an experience than a game.
Someone reads out the story and you turn over a card with an amusing word on it that fills in the gap.
I love the cards and the font and have fond memories of it.
A quick google found very little though board game geek indicates this was published in 1920.
Anyone else remember this?

Can you roll cars in Dirt 2?


I had already been impressed by the demo, in particular the Avatar integration over on Feeding Edge the game itself is a really impressive off roader.
A mix of real rally stages (with co pilot reading the pace notes), and stacks of buggy racing and point to point.
The changes in the surfaces from the dry to the muddy and sticky make this one very impressive simulation style racing game.
I have been playing totally with the in car view, which means you get the full effect of splashing in a muddy puddle and waiting for the wipers to clean your screen as you hurtle into a sharp blind left hand bend.
If you like driving games (and if not why not) then this is an awesome blast.