Whilst on the subject of games I have had to be a bit more choosy in what games I end up getting whilst setting up Feeding Edge. Moving from a two income family to a single income and a startup entrepreneur does not make for instant high amounts of disposable income :)
However, games have been a driver for me to even start with computers in the first place and the crossover of work and play means that understanding them is even more important.
As the games companies start to figure out social media and the interactions we have the style of gaming changes.
My first essential pre-order pick in that respect is Forza 3.
I have always like the Playstation Gran Turismo game for levelling up but Forza 2 with is car customization and paintwork, combined with marketplace sharing took this a stage further.
I will remember the previous Forza 2 for being able to make a custom version of the Ferrari 430 that I drove on my 40th birthday. 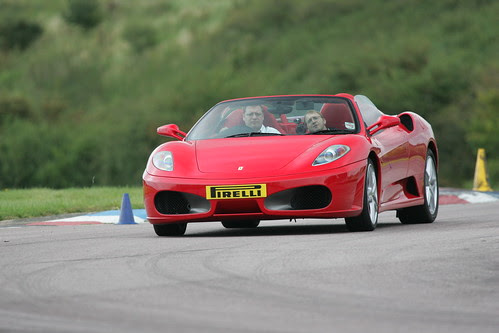 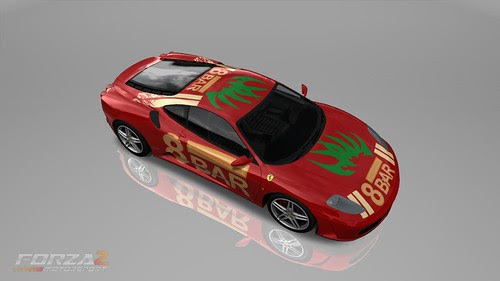 I was then able to send a version of this to my fellow eightbar at the time Roo and then also work that into various metaverse presentations and blog posts
Combine that with being into cars, loving driving games past all other games and its pretty much a given that Forza will grace my collection on the 360.

The other must have will have to be

Playing Prototype made me remember how much I really enjoyed crackdown originally :) The various points of obsession of trying to reach places like the top of the main tower, and the vertigo it could introduce are classic gaming moments in my memory.
So thats the list at the moment. I wanted to make this a top 3 but there are a few vying for 3rd place.
The Beatles Rock Band (Xbox 360)

Posted by epredator at 4:57 PM No comments:
Labels: games, preorder

I have been playing Prototype this weeked on the 360, (other formats available)it was a fathers day gift from the predlets.

My mini review starts with the fact that so far its seems very slick, very polished and a proper next gen title.
If you want to know what it is like it is best to apply some comparisons to other games.
Take Crackdown (Xbox 360)

Zombie bashing with some arcade Capcom style combo treatment and you are pretty much there.
The basic movement in Prototype takes place around another huge rebuild of New York. There is a virus spreading and causing all sorts of battles of zombies, army and mutants. You play Alex who is himself some sort of Prototype hybrid of the virus giving him super powers to sprint and bounce of walls, climb tall buildings, leap and glide around the city.
It does not have the same challenge of Crackdown in the climbing, i.e. in Crackdown some places were hard to reach until you had leveled up. In Protoype it just changes the way you may reach them as you spend experience points to upgrade to things such as a high flying glide.
There are lots of collecting and freeroaming style mini missions, races and tokens to collect if you choose not to follow the story arc.
Following the arc though has some very stylish flashbacks, as you are able to attack a target and absorb them you gain their memories, which pieces together the story for you. These are very well done, as is the whole voice active piece. Games have really come of age on that front and Prototype is no exception.
Another Crackdownesque piece is when you land from a high fall, the pavement cracks as you land with a bass laden boom and nearby cars are thrown aside.
When in the one on many combat sequences you end up with a range of styles and powerups to use, lots of flying combos and the ability to be very free form in your destruction of the target.
The violence is quite pronounced as there are lots of blade and explosions that have an adverse affect on the constituent parts of your adversaries, so there are a few body parts left lying around. Still it does have an 18 rating!
As usual though the 18 rating is more related to the language. There is much effing and jeffing and referring peoples mothers as in any gritty film or programme. This is always in context, but it does mean that its not one to play when the kids are around even if they are off outside. They may pop in at any moment into a cut scene and get the full treatment.
The Assasins creed influence extends not just to the parkour elements but also to when on street level, in a disguise walking amongst people they have put in the shoving out of the way side swipe that was in many a demo of Assasins Creed.
Unlike AC though the city and the people do not annoy quite as much with repetition of phrases.
The city is truly huge, bounding around it is great fun it its own right.
I think Prototype is going to get a fair amount of gameplay from me, and its certainly one to get hold of if you can
There are PS3 and PC Versions too
Prototype (PS3)