My recent trip to New York for Virtual Worlds 2007 was very much a work trip. However it was also social. I got to meet some really famous (in my metaversal circles) people. Many of whom I have already met in blogs and in Second Life and alike.
However it was a great ego boost, albeit a tongue in cheek one, to be treated and respected as one of this group that I aspire to.
Several people actually told me I was a rock and roll star. Well I will take that one and feel good about it :-)
I just twittered "Starting to believe own hype :-) just need the metaverse equivalent of a multi mill$ recording contract any offers ? :-)"
Anyway, it was my SL rez day the last day of the conference and it was a great meet up all day and then later in the pub. My bag got a little guiness on it, via another famous avatar.
I am also convinced that Frodo Baggins wandered past in the bar we were in, of course it may have been the fumes from Ren Reynolds White Russian (the drink of a philosopher) 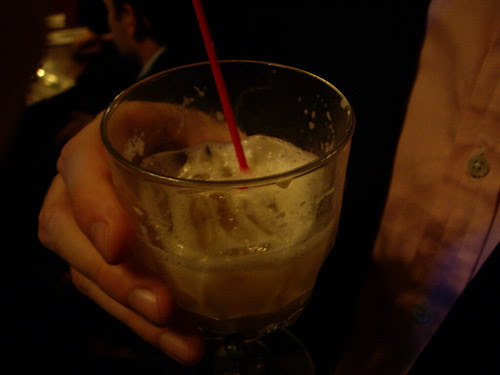 PS3 looks good to me

Okay so the delivery of my Game 3.0 machine having been ordered in a Web 2.0 way was not delivered very smoothly. Parcel Force Worldwide seemed to have hired some new drivers who were unable to find our house.
So I ended up with a mad dash to the depot (down the road) and caught them despite being out of hours.
Anyway, that done, and having no games (as they were coming by snail mail ) I nipped to Argos and got a couple more.
So what is it like?
Well it does look like a george foreman lean min fat grilling machine. It also DOES NOT COME WITH ANY HD CABLES AT ALL. How mad is that, I had my HD cable on the way for HDMI but figured I would have atleast had a component cable for the massive amount of money I was spending.
So I plugged it all on on old fashioned scart and sparked it up. Machines being connected now means that developers can get lazy and it spent a little while (once my wireless WEP key was entered using the on screen keyboard) updating itself.
I also tried to associate my playstation europe login that has my PSP registered as an existing login for the ps3 online network, but it turns out thats a 'different' system so I ended up re-registering to get online as epredator.
So I was at this point mildy annoyed, but still looking forward to some actual games.

Virtua Tennis 3 was first, and off to 'wimbledon' even though the name is not use. This has always been a fantastic game and the PS3 new version made for some great entertainment and I am very pleased with it. It may not be much better than the 360 version in reality but what the heck.

Virtua Fighter 5. This is awesome, I have always lover VF. It was the first proper 3d fighting game in the arcades and I still remember the moment I saw it running as a blocky low polygon game. despite loving it my wife elemming still manages to beat the c*ap out of me on it as I think too much and she button mashes. Eventually I will win over as I get the buttons and timing in my fingers but for now she is house champ.

I then downloaded some demos/freebies.

Formula 1 - Erm.... Wow. It looks awesome, TV like. I still had a quick go with automatic braking on so that messed it up a bit experience wise. But loved the look, I love F1. Just a pity as per usual it last years season.

Gran Turismo HD - One track, free game. Bloody awesome. It is pure GT. The replays nearly made me wet myself. Online ranking for timed laps is the basic structure. Blows all the other real car racing games away even as a mini HD demo.

The next day my HDMI cable and my two launch games arrived.

HDMI cable, HD (only 1080i on our TV but you cant have everything

Resistance Fall of Man. 3d shooter, not as good as I had expected a bit linear. The physics and AI might be great, and the depth of the graphics etc. May take a bit to get into. Its not call of duty or Halo.

Then....... Motorstorm. Blooming heck this is AWESOME. The HD intro, I was not sure which bits were real or rendered. The game, off road racing, dirt, deforming sand particles on the track. Tilting controller as you restle with the ruts and bumps in bikes, lorries, rally cars with a stonking soundtrack. The star of the show for me. Pure run, awesome Audio and Visuals.

Of course this was a quick set of dips into PS3, life intervenes and I am off to NY this week.

Other things that surprised and delighted me.

1. Sticking photos on the hardrive with an SD card and then using the 'photo album' slide show. This is a 3d animation of your photos as if they were paper and thrown onto a desk as the days scroll by. It is beautiful and engaging.

2. PSP remote. You pair your PSP with the PS3 and the PS3 is then put in remote mode. The PSP (where ever you are in range) will get a rendering of the PS3 screen. Some games will also work apparently. However, it means you can browse the photos as in 1 above, but on your PSP, with the ps3 doing all the rendering. Not sure I explained that but its very good.

There are some youtubes people have done. Does not do teh HD justice :-) but imagine this whilst tilting your PS3 controller.

Some footage of the photo album browser too

Finally I woudl really have liked to have had Home ( the virtual world doodah) there for launch. Its one of teh reasons I felt I should get a PS3 both as a gamer and metaverse evangelist. Just gogin to have to wait until Autumn, I should have realized! Damn release dates and schedules.
Also really looking forward to Little Big Planet, but I am happy to let them get that right!
Posted by epredator at 3:45 PM 1 comment:
Labels: ps3 launch
Newer Posts Older Posts Home
Subscribe to: Posts (Atom)