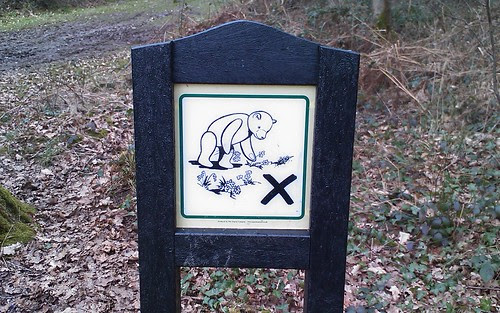 Do Bears?, originally uploaded by epredator.

When I first saw this sign at Itchen Valley park near Southampton I was not immediately sure what it was saying.
It could be referring to not allowing any furries, which is not a very nice thing to do.
It could suggest that picnics are not to involve any toys.
We thought it referred to what bears do in the woods, and saying dont do that please.
Still a nice try at a universal sign :)

I am now a few weeks into my freedom from my corporate shackles. Its obviously an difficult time financially, as starting to get that pipeline of paying work requires a certain amount of goodwill and engagement. It was also made a little more tricky by the slow payment processing of my former employer of my shares that I sold back on Feb 3rd before I even resigned.
For some reason the money has sat around waiting on payroll, all the tax etc makes it difficult for them. Also having left with some of the month left to run and having a salary paid in advance means I now owe them money. The net should be some money coming my way, but the actual manifestation of this was a payment into my bank today (traditional payday) followed by a pulling it straight back out again. Something of a pain, but it will get sorted very soon, or at least it better!
Another thing to put on the list!
We had a bit of drink up last night and the guys I have been working with the last few years gave me a good send off. Having left straight away I had not had a chance to physically say goodbye, and explain all.
The great thing now is that the freedom to engage with people, to make my own deals and trade offs and to general be influential in the industry looks extremely rosy.
I seem to be even busier than ever, especially with the influx of contacts and linking of ideas and people together.
I have some speaking engagements to do. Monday is metanomics in SL later in the month is a conference in Derry with the creative industries. More on that on feeding edge
The balance now of taking short interesting pieces of work versus long term full time roles is going to be an interesting one.
I know I will still get the questions why did you choose leave whats the real story, but I think that will all become clear in the fulness of time in an appropriate forum, which for now(for once) is not the blogs :)
Posted by epredator at 4:43 PM 1 comment:
Labels: freedom
Newer Posts Older Posts Home
Subscribe to: Posts (Atom)