What a week/month stop I want to get off

There seems to be so much going on, much of it metaversal.
Several trips to London both presenting at unusual venues such as under the influence and going to the Open Rights Group meeting.
More than ever though, and as an opposite to the view that online virtual worlds make you introverted this has been about meeting people.
Hanging with Ren Reynolds, Eric Rice, Roo, Kosso of podcast and bloghud and meeting new people like Justin from the music group Redzone.
Having been doing lots of SL I was convinced (by ren) to go back to There.com and give it a longer go. Not least because There were opposite the IBM stand I spent a few days on at Virtual Worlds 2007

I ended up buying a very cool buggy and razzed around, after a very odd conversation about metrosexuality with a There resident concerned about how his trousers looked. 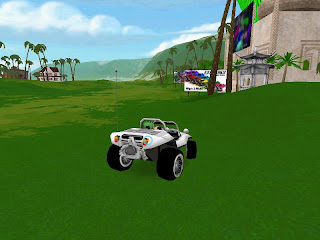 Twitter has taken up a fair amount of time and SMS usage too. Its facsinting the way that is binding people across many platforms and giving a feeling of connectedness.

I am also trying to document the history of IBM and eightbar in Second life and virtual worlds. Partly for fun and partly for when people ask, "so what did you do then? and why? and when?" before it all fades into metaverse rock and roll obscurity.