Today has been quite a day in our Choi Kwang Do journey. In fact it has, and continues to be quite a week. Our home Dojang of South Coast CKD opened up two new venues this week. It means we get to go and do multiple family and then adult classes every day of the week except Fridays. So we did. That included a great class with Master Brophy who came down to teach us at the Gosport opening.
Today (Saturday) was grading day for Predlet 1.0 as she moved to Gold Belt. A great achievement and she did brilliantly. 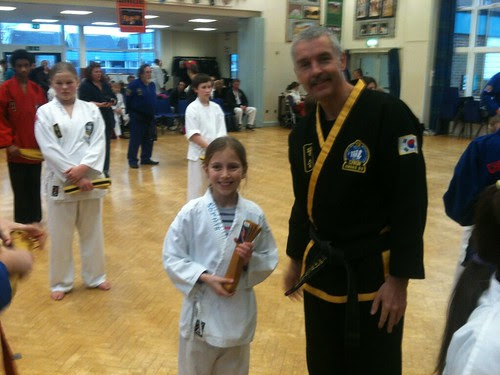 Also though I was not grading I turned up in my full Dobok, which confused some people as I did not join my fellow belts for grading.
However just before the final white belt grading sessions the entire grading lined up, filled the hall and we got to see Sabumnim Webster (who runs South Coast CKD) get his blackbelt second dan certificate.
Then the took the floor and announce to everyone that I was now joining the ranks of the Assisitant Instructors. Those who wear blue and are called by the name Kyosnumnim. I had to dash to the form and receive my new blue dobok, then dash off and change into it straight away and get to helping with the white belt and white belt senior grading.
It was great to be able to dive in and help though to start off with I did wonder what to do first. However it became clear we all just help one another.
As it was such a big grading though all the instructors were called to the floor to hold shields and focus mitts in the drills so that broke the ice and started me on this part of the continuing and very exciting journey. 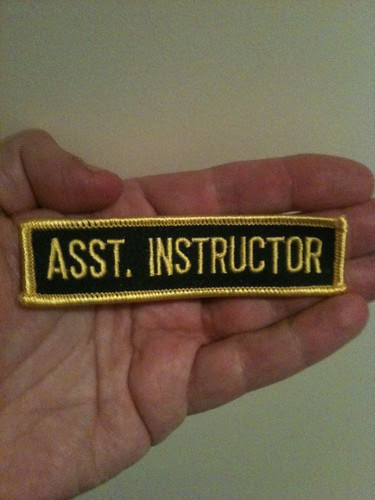 I now have to quickly sew my badges on the new uniform as tomorrow we are all heading to a massive instructor training course.
So that is Choi 6 out the the 7 days and all very intense and exciting.
Whilst I will miss my first class on Monday as I am doing a BCS presentation in Southampton (which includes Choi Kwang Do) I think I may need a moment to gather my thoughts anyway :)