Saturday saw another bi-monthly gathering of the Choi Kwang Do family at the local school hall for a grading session. These sessions are very energetic and exciting moments in an already energetic and exciting way of life.
It is less of an exam, more an expression of what you have learned. Each belt has a set of combinations, patterns and moves associated with it.
Typically we are grouped with similar belts. In this case it was yellow and gold. Each belt has a junior and senior component. The senior belt has a black stripe. 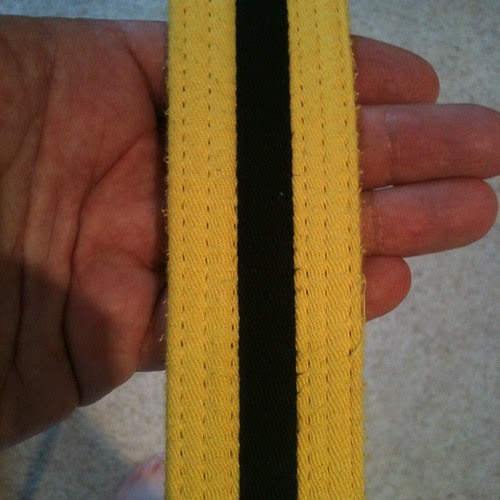 Predlet 2.0 and I went from yellow belt to yellow belt senior. It does not feel that any of this is done in a rush and it is not a pre-requisite in order to continue, which is why if feels more relaxed yet important than a traditional test or exam. You enter into a grading having spent 2 months of practice and growth.
In my gradings I started off very tense and in particular when doing patterns and combinations I was applying force and power more than technique. In Choi it is the balance of trying to perform the movements in a relaxed fashion, focusing on the angles and the technique, and then in other exercises to exploit that technique with either power (for the big muscle groups) or speed (for the twitch muscles).
This means that when performing a combination or pattern (as there is not a target to hit) you focus on being relaxed and flowing in the move. When it then comes the power test the muscle memory is already in place and you can up the adrenalin and induce very focussed power.
I am learning to turn down the wick on my imagination that I am having to punch or kick anything in the combination as I know have felt the difference in when you explode the power and technique, as opposed to maintaining a steady high average of power across all the moves.
It is a learning journey and just as with standing up and presenting, or talking about new tech to people there is a pace an flow that you have to feel and in many ways turn parts of your brain off to allow the other parts to do their thing.
So onwards :) just 15 more belts to go on a journey to blackbelt which of course is not an end point just part of a longer journey, long may it continue.
Thankyou and Pil Seungh to all the instructors (Assistants and Sabumnims) and to all my fellow students for making the day so good.
Predlet 2.0 is certainly very proud of his new belt and looking forward to some new choi toys in the next few weeks. He also enjoyed the fact we had Grandmaster Choi on the car stereo on the way how telling us the proper Korean terminology and pronunciation having bought the CD :) 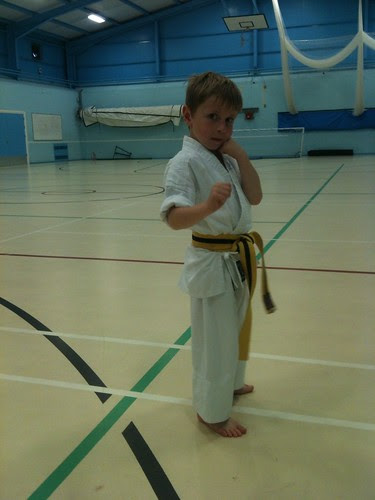 Posted by epredator at 8:55 AM No comments:
Newer Posts Older Posts Home
Subscribe to: Posts (Atom)