I grew up watching carry on films. There are a few things which if they are on TV I end up having to watch them. Tonight was Carry On Camping. I was 2 when this was released but it was on YV when I was gowing up. It is pure brit humour and I think stands the test of time. A mix of double entendre and pure farce make most of the films just hilarious. As a kid I am sure I did not understand the slightly fruity nature of things, but it is harmless fun. It forms the roots of many other pieces of comedy as the comics of today have experienced this too.
Take this "gone for a pee" and abbot and costello/marx brothers style fleecing

A whole host of carry on films out there to enjoy.

Comedy highs and lows this week on radio 1

This week on radio 1 the Chris Moyles show, which I always listen too despite being over 30, hit a high and a low.
The low, and one they are still joking about, was poor old Chris Rock. Now Moyles is clearly a fan and seemed a bit embarrased that Chris Rock was clearly asleep. Chris Rock is funny on stage and probably does so cool interviews, but this one just plummetted and bombed.
For some reason I pay more attention to how people work crowds, audiences and guests now. If the thing is not working you have to change tack, change gear, try a few new things until you find something that clicks. Moyles did his best as did comedy Dave but it just plain died death. Thats the beauty of live radio though.
However at the end of the week the bristol accent of Justin Lee Collins really really worked. It was some of teh funniest radio I think I have heard but it was also spiced up by JLC doing his Tom Jones impression. He had worke don this on one of his shows. as Moyles pointed out all his shows tend to be "I dont know if I can pull this off but I will have a go".
They popped a bit of the performance on Youtube. It was really really good. I will make sure I grab teh podcast as I cant help but think this will be the main part of it.

Strangely Moyles also appeared on the live cooking show that Gordon Ramsay was doing on Friday. A show that did have me laughing but I am not always sure why :-) The mickey take that Moyles did of the hard hitting Ramsay was great. Odd that some could make a joke up about melting chocolate on a bain marie ---- Done.
Also the show seemed to have an awful lot of wobbly cameras for a live show, about 6-10 camera angles it seemed, this was a bit hectic if people were supoosed to be following along in the kitchen. The Web cam hookups to other people cooking were funny, especially the naturist which gave Ramsay a stack of swearing jokes to throw in. This show is a good idea to get people cooking. I cook all the time so I did not need convincing, equally I did not follow along.
Anyway, it was good to see/hear both ends of the spectrum on the same show in the same week and appreciate how to make live events work better.
Posted by epredator at 11:08 PM 1 comment:
Labels: radio moyles rock tom jones justin jlc

Is it any different out there?

I have had several conversations with people today about just how long I have been with the same company. Some people admire it, other people view it as lucky many others see me as institutionalized. Linkedin hassle me everytime I logon saying my profile is only 85% complete becuase I only have 2 positions on it (partly becuase I have only been using it a for a few years and did not do a full history)
I have been with the same corp for 17 1/2 years, plus an industrial trainee year from university. That is quite a rare thing these days.
I am genuinely interested in how other people view this sort of loyalty, or if they view it as lazy and safe.
In many ways being in a large corp is the same as being in an open market, there are a pool of things going on, people have to hustle for jobs and funding. There are huge opportunities and clearly some rights as an employee.
At the same time it is a restricted domain. Whilst you might manage to carve something unusual as I tend to have it often does not blend well with the status quo.
So is it a good thing, a bad thing or just a thing of no great description?
I have had some great conversationns over teh years with people who have left corporate life, equally many of them come back again. I have also met people that consider this sort of longevity lucky. In a way it is, but equally it is of my own making, by constantly finding new things and understanding them.
I know some people get to this sort of place and decide to just plod along playing the game until retirement (which still is a very long way off) but that is certainly not my style. Equally there must come a point when being all rock and roll and pushing things and experimenting you start to age and stop being quite such a punk rebel and turn out a bit more rolling stones. Of course the Stones still have a great credibility and an awesome history :-) That though would be the case in any sort of career I think, getting older and wiser?
I am not sure where I sit on this. When the predlets get a bit older will they see me as a plodding corporate wage slave or someone with vision and drive doing cool things. I guess that is up to me to make sure I dont let them down on that front :-)
Posted by epredator at 7:25 PM 4 comments:
Labels: career 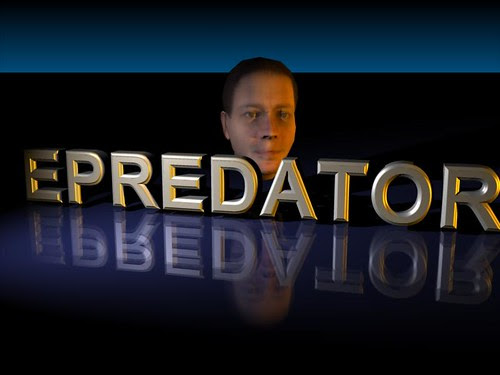 I used carrara to render a head that I got done by the cyberextruder guys. Its not a bad rendition, I may have to widen me a little :-)

Over on twitter xantherus just posted this excellent video and link to the voice of the street
In short using QR codes to connect street artists and viewers anonymously.
A very nice use of a clever piece of tech accessible via camera phones
Posted by epredator at 5:04 PM 1 comment:
Labels: qrcodes

Games have come a long way, but its all back to where we started

I often find it funny people's attitude to games and consoles. The recent batch of social and "casual" games has helped widen the benefit and appeal. Just take this typical family gathering.
Years ago people would have gathered around the piano for a sing song. Now... well after years of 1st person shooters, fighting and driving the PS3 has this Singstar.
People often worry about whether they can sing, but it just does not matter if its fun.
Not all games are the same, not all games are violent, though singing final countdown can do some damage on this :-)