misleading message or what? 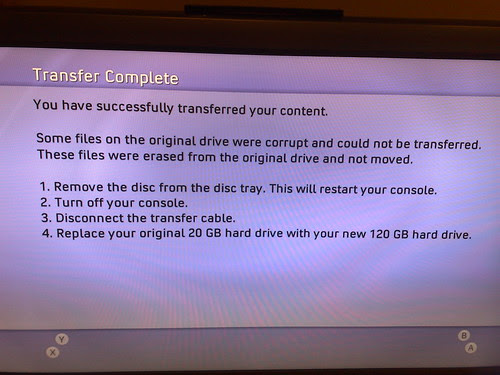 misleading message or what?, originally uploaded by epredator.

I decided to bite the bullet and upgrade the 20gb drive to the 120gb drive on the xbox360. Stupidly expensive relatively speaking, but thats proprietary hardward for you!
The drive contans everything, all you paid for content, all you games saves all your profile and achievement information. If it goes wrong thats a few years lost and a few pounds worth of xbox live arcade titles downloaded and payed for.
So after 1hour of transferring this is result.
It says Successful, but the next line says apart from the bits that were not!
The drive seems ok, the games seem to be there, content etc, but if something has gone I wont know until I hit it an miss.
Not a great feeling.
The transfer is 1 way and apparently deletes all the stuff due to DRM on the smaller drive.
A bit lacking in customer service I think?
Though not as bad as poor Aidy who moved to ireland and the xbox live will not transfer his country becuase of all these region lockout insanity.

Posted by epredator at 2:21 PM

region lockouts in a world where countries are an annoyance only when you need to get something across in physical form?

No, really. Make it specific as to what country a achievement was obtained in (some games have different difficulties as they get ported to different countries due to differences in console gaming, or additional new content taken or added in), but let people have a choice to compete against each other around the world if they can take the heat, I say.

You have to admire the stupidity of console development companies.