30th Year of Choi Kwang Do and 2nd Dan Grading

This week sees the 30th year of Choi Kwang Do as a martial art. Many from the art are travelling to Atlanta for the celebrations. we were not in a position to go with this the last week of school and work commitments, but I think we managed to celebrate in our own way. A few sunday's ago predlet 2.0 and I stepped onto the floor of the dojang in Farnborough to face our biggest challenge yet in Choi Kwang Do. Together we went through the grading for our EE Dan (2nd Degree) Black Belts. We shared the floor with other students heading for their 1st Dan. It was an amazing and gruelling experience with 2.5 hours of full on effort. Also Predlet 1.0 took her tag grading for 1st Dan blue tag afterwards, which is about another year or so until she will be doing her 2nd Dan. She may well be doing that at the same time as Jan does her 1st Dan too, another family double grading. To do 2nd Dan you have to also effectively do 1st Dan again, then add another layer to that. These gradings are as much a test of mental strength as they are of physical conditioning. Remaining focussed but remembering what to do and to be as flowing as possible whilst still delivering aggressive energy is a challenge. I know during the course of my patterns my mind lots its way for one set, and in speed drills I transposed two of the kicks in the wrong order. The experience from the 1st Dan of something similar helped a great deal as that is the time to reset, acknowledge it and get on with it. There is to much to do to be annoyed or worried about mistakes. An extra problem this time ardour was the humidity. It was pushing 30C outside the hall and Doboks are heavy fabric that soak up a lot of sweat. During our spinning kicks though I kept having to move around a bit as a slippery puddle was forming under my feet and falling over risks not only losing focus but injury towards the start. For most of the grading we were shuffled around in the line up to avoid predlet 2.0 and I being next door to one another which can be a distraction. However for the 2nd Dan elements it was just us. He is so fast at his patterns that it can throw me as I he is 1 or 2 ahead but we had practiced that so I learned to try and ignore him and focus on mine. This is tricky when you are combining being a proud or concerned dad, an instructor and a fellow student doing their own thing all in one. You also have the amazing panel of very experienced chief instructors and Masters watching your every move and family and friends behind you also watching. Unlike being on stage or TV though this does not feel like a performance, it is important to try and suppress the performance elements, so I find a different me and try and work internally, but being human its hard not to look up and wonder what anyone is thinking, am I doing it right? am I letting my teacher down. These fleeting moments can interrupt the flow that one is trying to achieve whilst also managing heart rate and breathing to give maximum effort but not take everything from the tank for the rest of the grading. We all managed to achieve our goals though. 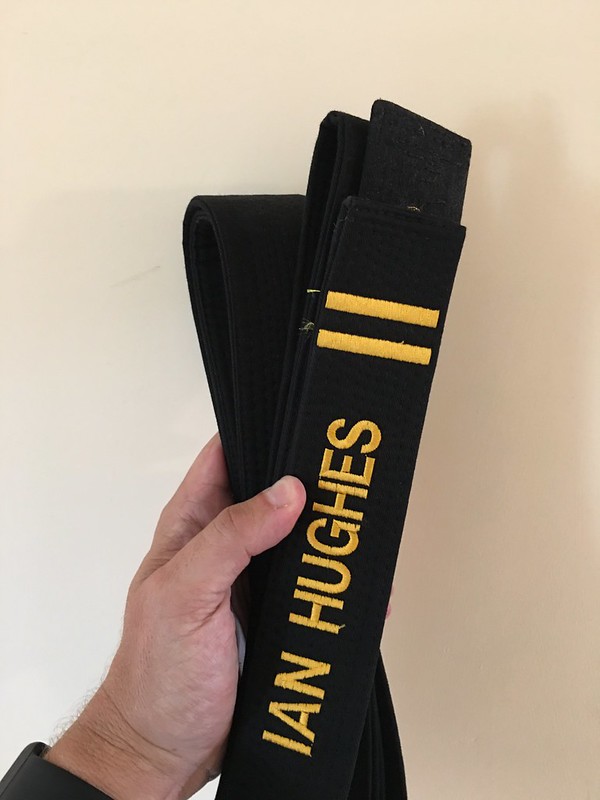 I had spent a good few months focussing on conditioning, PACE training and doing full sets of curriculum in order to be ready. On the Monday before the grading I had tried to do almost a full grading of techniques, patterns and speed drills plus some heavy work on the bag and BoB but with a few more breaks and lots of water just to rehearse enough. My in class preparation from Master Scrimshaw and with my fellow students set the foundations for being able to do this. It is certainly not something you just turn up to and hope you can do it. After my various teeth extractions at the start of the year my energy levels had dropped and a few months ago in class at Basingstoke CKD I couldn't do even just the kicks in order at a good pace without a water break. That was my Rocky steps moment, each training session I explored how much of that I could do until that full set on the Monday. These are incredible experiences and I am really appreciative of the instructors and masters who give up their time to run these gradings on a Sunday. The feedback and advice before and after is always very useful and the ecouragment partnering for some of the energy sapping drills really helps too. I am really please for predlet 2.0 too. At 10 he has achieved not 1 but 2 black belts and is enjoying the next stage of the journey too. He was worn out for the week after this (as we both were) which given how energetic he normally is indicated the effort he put in too. 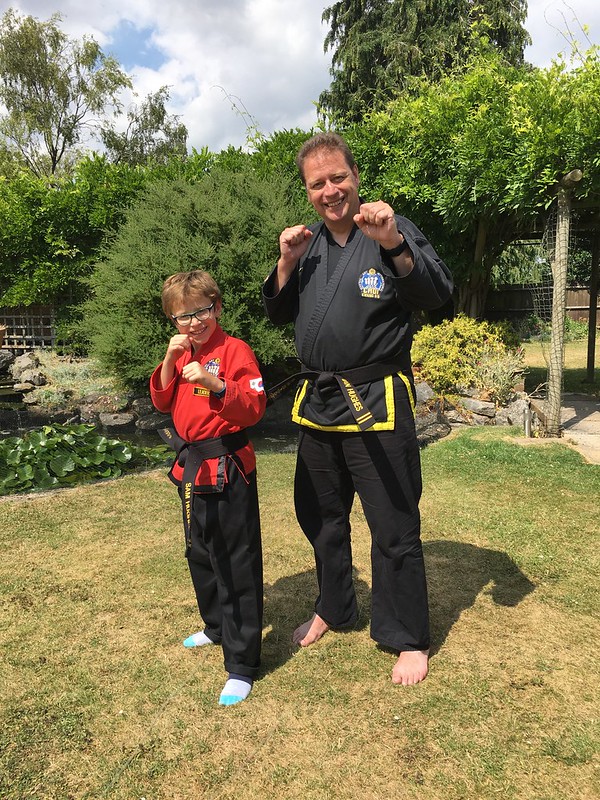 These belts represent a milestone in a journey, they are called degree's because they are the result of many years of study and practice. They are as much about mental strength as physical and whilst the belt is an external indicator it is the feeling and sense of achievement that is inside that counts. It is also a reminder of how much there is yet to learn, each belt brings new challenges, chapters in a book, and the black belts are like a whole new book in a series. I remember my first grading and at white belt, thinking how can I get through this it is hard. 1st to 2nd Dan is the same feeling. Yet each technique that is learned works on the base of those very first techniques and the attitude to them. They are all equally as important, and learning new things makes the previous new things seem familiar. Familiarity doesn't become complacency though, ever time you think "I've got this" a new twist, distraction or realization makes itself known. As we say in Choi, Pil Seung! and a very happy 30th anniversary to everyone.
Posted by epredator at 7:29 PM

Although the Metaverse comes with both pros and cons of Metaverse, there is also the upside: we're celebrating advantages and reducing anxieties.