Last weekend Predlet 2.0 and I attended a full days festival of Choi Kwang Do set up and run by the Hampshire schools. It was an incredible experience, especially as we only started Choi back in February.
CKD is a noble martial art in that it does not deal with competition, only self improvement. It is this fact that makes it one of the most friendly gatherings of people I think I have ever been too. Equally it is powered by an energy and enthusiasm that is far greater than that of each individual in the crowd of 300 people there.
The event was at Henry Cort in Fareham, where we train on Thursdays. Instead of the usual smaller gym we had the massive main hall. Which was filled. This shot was taken as we all dived to take on water and lunch :) 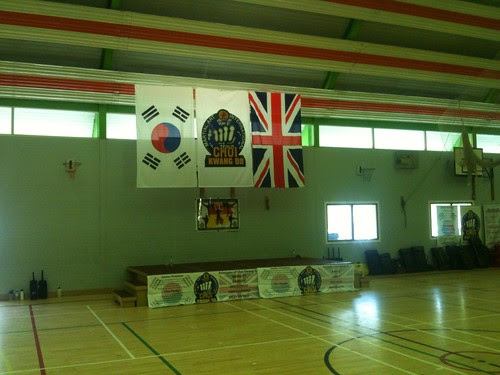 Out usual Gym was kitted out with both mats and some extra toys. 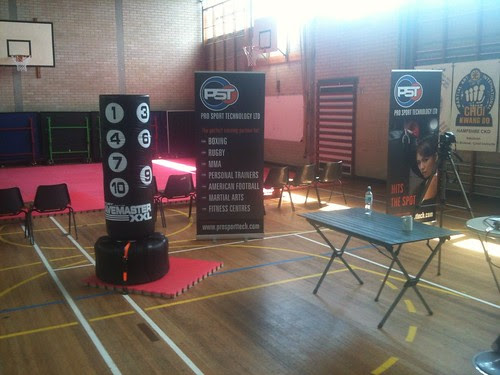 It was strange to have been part of the transformation of this area as we normally just have this for our class sessions.
The event had some very honourable guests, whilst Choi treats everyone equally experience is celebrated. Therefore to have Master Brophy come and give us 1.5 hours of mass training session and inspiration was in itself worth going. Master Brophy converted to Choi having studied many other martial arts to exceptional levels. It was the friendliness of the dojang that inspired him. Something he shared with us. He started back at the very beginning of Choi, choosing not to take a conversion path but do it from step 1. That was 24 years ago. Choi Kwang Do is 25 years old, and has been going 24 years in the UK and it started here with Master Brophy.
I have heard a lot of people speak and motivate, sometimes I get to do it too in conferences etc. However he is a Master with good reason. He shares humbly, yet with authority and being a physical martial art shows by example. There is nowhere to hide in this if you can't actually do it.
Choi classes tend to leave you feeling somewhat elated, not just from the exercise and adrenalin but from the mental workout you get too. So his session was stunning for every rank.
After lunch we split into groups and got to round robin through sets of exercises and sessions. These were all superb and very varied.
My first session was with Sabumnim Evans on stretching. Some advanced stretches that, after the earlier sessions were most welcome.
Then we were off into the Gym and had much more with Master Brophy on close in fighting dealing with knife attacks. We were on the mats for this and it was something I had not done in Choi yet. We had covered a little on grabs and escaping, but this was pretty full on. We paired up and then too turns sidestepping incoming knife stabs, turning and dropping the opponent, with a great deal of care and respect as always.
Our next session was with the Herman Digital Trainers placed on Wavemaster posts. (as in the photo above). These are 3 way accelerometers that stream data to a PC. They are intriguing. we got to do a fast light punching test, how many punches in 30 seconds, which the accelerometers are great for. Secondly we got to do three hard punches. This got me thinking about the science and how we could make it better. The units are great and certainly provide some relative indications of force, though mass needs to be considered relative to the motion for the number to mean something between training sessions. My brain was also attempting to game the device. It was directly opposite a strike pint so it made sense to punch straight, not confuse it with any lateral side movement. It is good to see CKD is up for looking at the tech because, after all , that is what I do for a living :)
Out next session was more tech. A VT1 video evaluation package that Sabumnim Bicknell talked us through. Originally from golf to analyse the swing it was used to match Grandmaster Choi's movements (as the target we all aim for) with the student and other instructors. It takes a lot of manual reference points and key frames allowing synching up and overlaying, with various spline and trace tools added in. An impressive piece of software, but again my brain was saying can we do this live with the Kinect? Having trained for a year with the UFC kinect trainer there is something in that, more investigation to do :)
The next session was a bit more of a workout. Dealing with Redman. This large padded suit (in red) lets us deal with an actual person rather than a training dummy like Bob 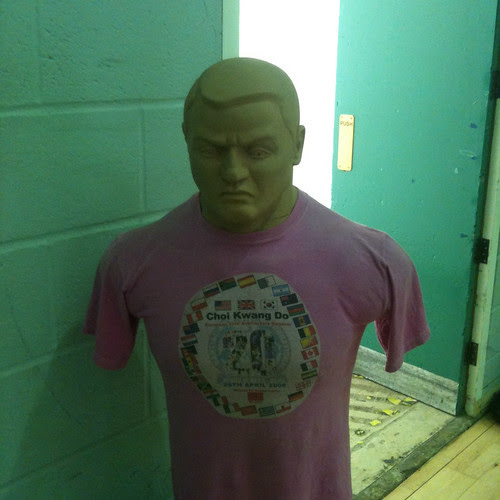 We were doing Redman take downs. A block, rear punch, side kick to the knee, kick or knee to the abdomen and a back fist strike to the back of the head. It is still very respectful, but you do crank it up a notch and everyone loves this drill.
The final two sessions were with Master Harper and Master Miller. Two more very well qualified and extremely inspiring figures in Choi Kwang Do. With Master Harper with cardio, lots of fast moving and then paired drills including getting up from a prone position to deal with an attacker.
With Master Miller we did reverse speed drills. Speed drills are an attack first combination but in this case backing away not advancing. It was preempted by some flexibility workout for kicks and even some jumping kicks. Things we will get too soon in out belts.
During the lunch break (and I am glad I did this when I had the energy) we got a shame photos taken by Martial Arts Photography UK. Predlet 2.0 is very flexible but look what it does for a 44 year old tech geek who sits most of his life :) 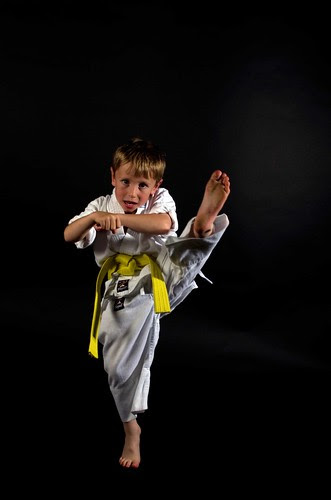 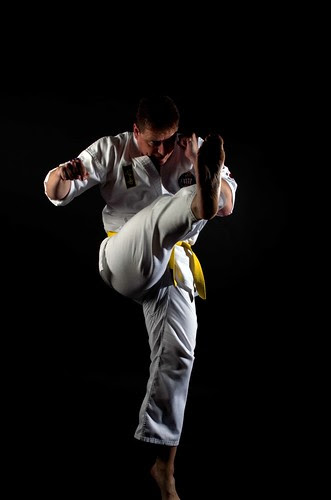 I have a long way to go and you are always learning in Choi, but if you want to see how its down properly check out the rest of the photos on https://www.facebook.com/MartialartsphotographyUK
The day was fantastic, and the evening meal was great fun too. Elemming came along to that with me. That helped in seeing that this is one big family and we are really all in it together :)
Huge thanks go out to all the Hampshire Sabumnims but not least to South Coast Choi Kwang Do and Sabumnim Webster for showing Predlet 2.0 the way on the start of this journey.
So to everyone  (The art's motto) Pil Seung!

Posted by epredator at 8:40 PM