It is really hard to write some things, but it would be wrong to not write about this. My Dad Ronald Hughes (Ronnie) died in his sleep on Monday 18th April at his home in Burgh Castle near Great Yarmouth.
He was 72 years old and had a rich and varied life. Dad was always full of stories and humour. Wherever he went he made good friends with people and would soon be laughing and joking with everyone.
He was born in Yorkshire, as a Yorkshireman that made him always very sure of his mind. If anyone has ever had an argument with me they will know I learned tenacity and debating skills the Yorkshire way from him.
Dad spent most of his life in an around Great Yarmouth in Norfolk. My grandparents moved lock stock and barrel to run a guest house in Great Yarmouth. Dad had three older brothers Brian, David and Eric and a younger brother Tony. Together they had some great times growing up.
Dad told me stories of being a barrow boy at Great Yarmouth station, helping pull peoples luggage to the booming holiday industry places. Yarmouth was a popular town for acts too and they all stayed in and around the area. Dad told me tales of being on a bus with entertainers and comedians. Bumping into various rock and roll greats too, you name it he had met them.
Dad was an engineer. He was brought up in the fine tradition of getting a trade. He worked as an apprentice welder and then went on to become the foreman, and union shop steward in the ship building industry. He came from a suitably left wing working class background. That meant he truly cared about the rights of those around him and he fought for those rights. He stood up to the bosses so much that when they suspended him and a colleague in the 70's for looking after those rights it was a catalyst for a national ship building strike. (Again I see where I get my strident and moral nature from!)
He was a great font of knowledge during the time I left corporate life, understanding and supporting what I had had to do. Offices or shipyards it is all the same in certain ways. 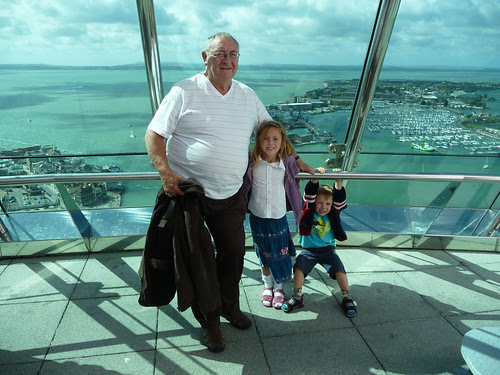 I know Dad had no idea really what all these computer things were about in the 80's but he was very supportive of me and my tech and gadgets. He really wanter me to going to poly/university (and I did). That was my trade and he recognised that, so he often went out of his way to help get me the kit. It wasn't until I showed him the work in Second Life back in 2006 that he finally said.... "Oh thats what you do".
I got him into a gaming too. He had played a bit of real golf but got really into the golf games on the consoles. He even took his PSP on holiday to play. I now have his old computer and it looks like I need to pick up his Championship Manager season wheer he left off.
I have some great memories of going fishing too. Usually sea fishing at night. Sat drinking warm sweet tea from a flask as the mist rolled across the beach. I found a "portable" or telescopic fishing rod at his place and now the predlets want to come fishing.
He loved the predlets as any grandfather would and always asked what they were up to. He is convinced predlet 1.0 will end up on TV or in the arts and that 2.0 will be a high court judge. Of course he started saying that before I started my TV gigs and so he said that I was leading the way for 1.0 :)
One thing my Dad was not was a royalist. I remember the last Royal Wedding him clearly stating what a load of ...... So it is going to be somewhat ironic that the local newspaper announcement of his death will be next Friday, in the royal wedding issue. That would have put a smirk on his face.
Dad did have one ambition that I wish we could have got around too. He wanted to go to New York and stand on a street corner and eat a foot long hot dog. However, serendipity kicked in. On the day Dad died, before we knew, we were at Monkey World with the predlets. Predlet 2.0 demanded a hot dog (not something he usually goes for). He sat and demolished a foot long hot dog there and then. I remember thinking I need to tell Dad about this, but in a way I think he already knew.
Having shown Dad what I did for a living, and for him to be able to have seen some of the TV shows I think I made him proud. As a Dad you want to know your kids are doing well. I am an only child, so it puts some extra pressure to deliver the goods.
I know I was very proud of my Dad and loved him loads.I was proud of what he stood for and of how much he cared about everyone else.
His funeral is in Gorleston on 5th May 14:40
Bye Dad R.I.P xxxxxxx

Your father sounds like a good man. And so do you. Hugs you.
Chantal Harvey.

We both liked and respected Ron for the way he re-acted with us and our family.
He was a good man and will be sorely missed.
Rest in Peace.
Jean+Alex. xxxx

He was ace - and this is a lovely piece about him. I sent it in an email so Dad can show it to Mum.
Joanne x

So sorry to hear your news Ian, and knowing you personally I can only imagine how proud your Dad must have been of your many talents. A lovely epitaph in this post. Lots of respect to all of you, and best wishes.

So sorry to hear of your loss, but what a wonderful tribute to your dad. Sending deepest sympathies to you and your family.

Really lovely tribute, Ian. You captured a special man and I know he was an amazing person because of what he produced in you. My sincere thanks to your father for making you such a lovely, caring, talented and extraordinary man. My thoughts and wishes are with you...and all your family. xo ps I think I now understand where your ironic and wicked sense of humour comes from!