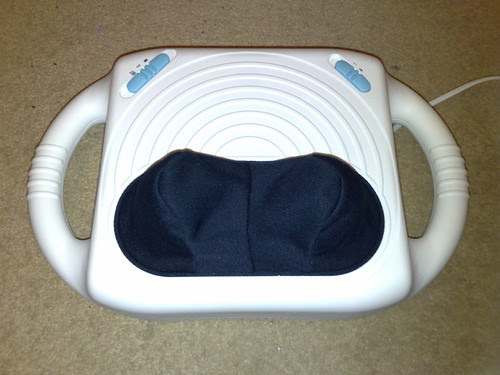 After years of being hunched over a computer, trying to adopt an ergonomic pose, combined with the weird stuff that happened a few years ago I have ended up with a right pain in the neck :-)
Having adopted a much better stance now due to some great physio work last year I sometimes get caught by this annoying pressure in the back of the neck. Its very distracting and annoying to say the least.
I remembered seeing one of these machines at work years ago that someone had. I popped to Argos as I was feeling particulalry grotty and bought one. This happens to be a Babyliss one so they have certainly gone mainstream.
It is basically two rotating mechanisms that push and apply pressure as they rotate. This one has an additional cool pad that you chill before laying on your back with your neck between the two mechanical pieces
I have to say that it seems to do the trick, or at least do something. I will check with the physio on Monday and see if he says "tut" to it.
It may be mind over matter, but its got to be better than taking tablets hasnt it?
So 5-10 minutes of this a few times a day plus sitting properly and everything should be fine and dandy :-)

Hello. This post is likeable, and your blog is very interesting, congratulations :-). I will add in my blogroll =). If possible gives a last there on my blog, it is about the MP3 e MP4, I hope you enjoy. The address is http://mp3-mp4-brasil.blogspot.com. A hug.