Jools Holland and Imelda May plus Marc Almond and Ruby Turner

We just got back from a night out (yes a real night out with babysitters and everything) at Portsmouth Guildhall for Jools Holland's tour.
Jools is an awesome musician and very well respected as well as having a road appeal. So the demographic of the audience was from kids to pensioners. He and his 16 piece band of brass, hammond organs, drums guitars and singers plays a lot of blues, boogie woogie and just fantastic music.
We had seen him and the band before twice over the years so it was good to go again as the sets and the guests are always very varied.
The biggest initial treat was the warm up act, which does her a dis-service. Imelda May and her band perfomed a set of songs.
I was blown away by her and her 3 man backing band. A double bass, a single drum and a guitar. It was pure rocakbilly. In fact the closest thing I could could think as a way to get your head into who she is is a cross between the stray cats and Gwen Steffani. I love the simplicity and style of rockabilly and proper rock and roll. When delivered with such a powerful voice and passion it just gets better. It was a real hairs on the back of the neck moment. Those are seldom wrong in my experience, (Maybe I should go and be an A&R person in the music Biz as I am sure thats how they feel about good artists).
Imelda May has a couple of free songs on her site if you register. Worth a listen, if you like what I have described. I will certainly be following this career.
I found this on Youtube from another festival gig.

Then it was onto Jools and the band. Very good, the usual comedy and passion that Jools and his crew bring. You cant help but be moved by that boogie woogie blues.
I managed to snap this, we we at teh back in the cricle, but you get the gist. 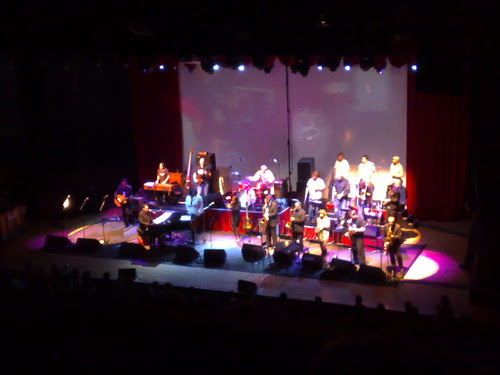 Not only is he an awesomely talented pianist, but he also picked up a rhythm guitar at one point. It is unusual as most music I like featured guitar heavily, usually the guitar blues solos and the bass are sparse, favouring the sax, trombome and trumpet solos. Which is all very refreshing. In particular Jool's band features Rico Rodriguez a ska and reggae legend. He even got to sing a couple of tracks in his awesome style.
The biggest surprise though was Marc Almond coming on as a guest. He got a massive reception from everyone. He has such a powerful and crooning operatic voice that his songs lifted the emotion of the crowd and had people on their feet. It moved from semi laid back boogie to powerful driving vocals.
He finshed his part of the set having done Say Hello Wave Goodbye and Games People Play with the anthemic Tainted Love. Now this is a tune that takes me way back. I even loved the marilyn manson version, here it was a driving blues band power croon. To see so many of the auidience singing along given the older demographic there was actually very amusing. All the fuss made back then in the press about tainted love and his sexuality it was reassuring that his pure talent and the strength of the song and the delivery had even made him a granny favourite. The song was originally done back in 1964 so maybe that helps, but Soft Cell putting it on "Non-Stop Erotic Cabaret" is the famous one and somewhat adjusted its meaning. Either way though it rawked.
You would think that would be hard to follow, but follow they did with Ruby Turner. Another powerhouse of blues and gospel. She just grabbed the whole thing and blasted out some awesome tunes.
It ended up with a good couple of encores ending with the entire band doing "enjoy yourself"
You are not supposed to record these concerts, so this is not an attempt to give anything away other than a snippet of the setup. You clearly cant beat real life.

Imalda May On Jools Holland