I left the 360 downloading a few game demos and got a just to play them just now.
I have to say that Ghost Recon Advanced Warfighter 2 looks and plays very well. The first GRAW (a.k.a. Tom Clancy's Ghost Recon 3: Advanced Warfighter) was very good apart from the very annoying "loose your squad have to do it on your own -- in the dark" mission which annoyed me.
However the best demo from today, and the one that is a definite purchase is Crackdown.

Images from the fansite kit very Web2.0 to release the artwork for people to explore themselves. 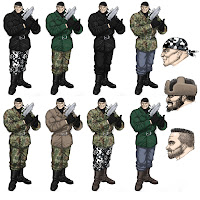 This feels like a real step forward for the free roaming GTA-alike. GTA is about vehicles and has added being on foot. It has been a very good franchise and will remain a top favourite as I even enjoyed the original 2d top down old school versions. It does however, currently atleast, stick with being 'real'. It does have a great spirit and feel.
Feel, spirit and attitude in a game is a hard one to quantify. Any experience has to make it into your fingers, your brain and your heart to be effective. All types of games and simulators have a formula but formulas can still have spirit. Rocky is just a boxing film, Star Wars just a space battling good versus evil yarn etc.
Your character in Crackdown not only drives and shoots but gradually gains strength and the ability to leap and climb some very tall buildings. It gives it a flavour of parkour. The free roaming with guns and cars, the semi super hero feel to it all make it compelling. Very Spider man or predator flavour in that respect.
It has much from an RPG with a huge area to explore and the more you play the better you get. The online experience looks like it has a more MMO element to it with Co-op. For a demo to be able to stand up to this free roaming nature and to not get lost of wonder what to do next is an achievement.
Sometimes I would rather just get the full game rather than get dissapointed by a bad demo of a really great game. In this case though its going to be a must purchase. Off to order it now.

Several times at home I have now seen the very funny star wars shortened, usually the reduced shakespeare company perfom the bard, but here they do Lucas.
Its on youtube in 2 parts and very funny!
Part 1 and Part 2
The screaming video response by ajaxsempahor is also worth watching as its one of the very talented crew who do the reduced series.
Posted by epredator at 10:33 PM No comments:
Labels: short, star wars, youtube

The previous post led me to have a quick look around youtube. This one surprised me a bit. 1 its very well done, 2) No way would batman be that good :-)

Posted by epredator at 7:28 PM No comments:
Labels: predator, youtube

Whilst updating my myspace profile because Colin had decided that was where he wanted to hang out I found this awesome predator video
I have not really been 'doing' myspace or bebo for that matter. Preferring instead the direct interactions of Second Life and the professional links of linkedin
Also at work we have our bluepages+1 which acts as a page with all the blog and social bookmarks plus tags and ratings. Its a bit of a lepa for many people to use these, but clearly they have a place in a non centralized self organizing web 2.0+1 type of way.
Posted by epredator at 7:08 PM No comments:
Labels: myspace, predator, video When Sam was born I had restarted this blog. I blog regulalry internally at work and get to see some indication of the readership. Numbers are not everything, but I do like this world map of all the people who came to see Sam's first news.
Its from google analytics, which I must say is very impressive.

Posted by epredator at 10:37 AM No comments:

We just got back from registering Sam's birth. The registrar asked my occupation so I said Metaverse Evangelist. Jan's was Finance and Planning manaager, though we nearly had a mistype on the record as Fnance and Plumbing manager.
So its now on the birth certificate and official. For the stats people a short description came out as Online Virtual Worlds. It felt like a start to the Jedi religion swamping census forms and becoming official.
The registrar made a comment "that will give them something to think about!"
Posted by epredator at 11:43 AM 2 comments:
Labels: metaverse, mmo, sam, second life

Had a bit of time last night world domination continues

Everyone went to bed very well last night. So I did a quick Second Life update, read and listened to the Reuters article with Mitch Kapor and then dived into Eve-online for a relaxing hour or so. It was that or viva pinata on the xbox 360, but I wanted to save that as Sophie is enjoying it.


Anway the eightbar corporation has now been created in Eve. I may have been a little bit premature as I ended up renting a very cheap office for us and the corp has 1 member so far! 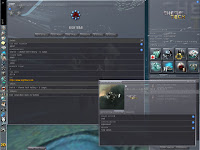 Its based over at the Unel IX Chemal Tech Factory in the Sing Laison region (apparently).


The cartoon's famous tagline is: "Come Pinky, we must prepare for tomorrow night" "Gee, Brain, what are we doing tomorrow night?" "The same thing we do every night Pinky — Try to take over the world!" which is something I used to play on my desktop theme back when I started on web project in 1997.